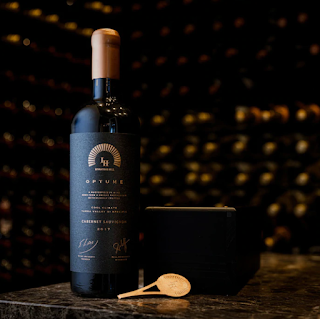 Releasing a Cabernet Sauvignon from the Yarra Valley fetching $800 was always going to create some controversy and split opinion. And it is no surprise that this Levantine Hill Optume has done precisely just that.

Sourced from a couple of undisclosed vineyards, it's worth putting a few things in perspective... Roughly 60 dozen each of the Cabernet Sauvignon and its Shiraz sibling were produced. What winemaker Paul Bridgeman and the team at Levantine Hill have proven in the past is that no stone is left unturned in their quest to produce the best wines possible.

At this price point, some comparisons have already been made to similarly priced wines. The fruit for the Optume comes from significantly fewer vineyards than a high profile South Australian wine, production is much less, but as you'd expect, it sees the best of the best treatment and it is pushed to a different market.

But just because you have a Kia budget doesn't mean Maseratis cannot be sold and enjoyed. Every product has its place. I posted a photo of these new releases on Instagram and received a message from someone proudly saying he buys the cheapest wine on the list when in a restaurant - and there is nothing wrong with that. Everyone has their limits and for some Bowler's Run is it. Similarly, I've seen people in a restaurant dropping over $600 on a bottle and mixing it with cola.

Some corners have already lit up suggesting the pricing is ludicrous and not reflective of the Yarra Valley. Or is it? Given the fruit is sourced from a few premium vineyards, it's been said that the pricing is out of line compared to those who planted vines in the Yarra and built their reputation over a number of years. Fair point, but does that mean every vehicle that hits the market now can't have airbags and touch screens and they need to start right at the bottom?

It's easy to shun the 'new guy' but perhaps we need to consider that some wines in the Yarra Valley are underpriced? The quality and precision of the winemaking in the district, for me, are not reflective in some of the pricing. Like a peloton, maybe this surge at the top end may drag a few along with it? Take Yarra Valley Chardonnay as an example. The quality of the $40 bracket is immense - similar wines in other regions would fetch $10-20 more per bottle. And consumers have shown they will seek out quality. I digress...

But to this Cabernet and what a privilege it was to have a sneak peek. Still youthful in its journey, I opened it to find some saltiness and roasted peppers. Blackcurrants are the hero as you'd expect, but they carry some energy and beguiling freshness. Savoury characters of mint, some soy and a flirtatious appearance of pan juices skirt the edges before those roasted peppers take hold. Dangerously smooth, it glides through the mouth with polish and delicate superfine tannins. Lingering long, put this away for a few years yet and be assured it will last well beyond a decade. Would I buy it? It's not in my price range - I'm still in the peloton (looking to upgrade my bike) and not driving a Maserati.

What a ripper this is! Bright and dancy with some crunch. Fill that glass up and just embrace this beauty from Comyns and Co.

CONSIDER A DONATION FOR THESE FREE REVIEWS

Since 2011, over 5500 reviews have been free to access. Consider a donation to keep Qwine Reviews thriving.