Being a Steward at RNA QLD Wine Show 2012

This was a tremendously eye opening experience. To see how the wines end up achieving their various medals at a show was very interesting, and perhaps not what the punters would expect. 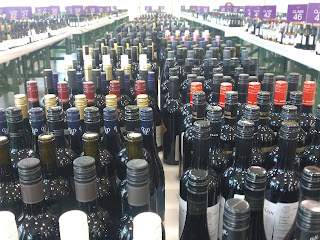 The Commerce Building at the Brisbane RNA Showgrounds was filled with wines all filed into their various classes - 89 of them in fact. These classes vary from current vintage to one year old wines, mature wines two years and older, commercial wines of any vintage, sparkling wines and Australian Brandy.

RQWS 2012 Fact: Although overall entries were down, the number of wineries entering their wines was up.

Each winery pays an entrance fee per wine entered and five bottles of each entry need to be supplied. Judging is conducted by four panels of judges which is comprised of a senior judge and two judges. Each panel also has an associate judge who is a judge in training.

For the first time at the show the 100 point system was used. Some judges were in favour, whilst others, well, not so much. But as the show went on the doubters warmed to the easiness of the 100 point system. Once all judges had scored their wines the average score from the four judges was given as the final result. This average is not gained mathematically but via discussion and agreeing upon an appropriate score. Witnessing such discussions and how each judge justified and held their position was most interesting. 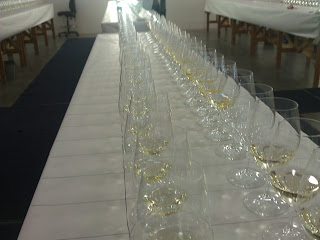 Despite the fact each class varies in the number of wines presented, by day's end all judges across all panels look at approximately the same number wines. Some judges may look at eight classes in one day yet others may only look at two. An example of this being the One Year Chardonnay class presented 91 wines. This judging panel followed this with One Year Cabernet Sauvignon which comprised of 36 wines. Another panel for example looked at five classes yet all judges looked at approximately 120 wines that day.
An aged Semillon class presented only one wine as another example.

Each wine is poured for each judged and placed on a table ruled with 8cm spacing as you can see from the photo. Once the judges have completed their work they go off and discuss potential gold medals. If golds are to be awarded, the panel return to taste these wines once again which have been freshly poured. Top gold is awarded to the wine which is the highest point scorer in the field. If more than one are awarded the same score the Chief Judge is called to make a final decision and award Top Gold.

At the conclusion of judging all top gold wines are assembled to determine trophy winners.

Behind the scenes, the stewards are not only pouring wines but assembling wines on benches identical to those in the judging area. All glasses are rinsed then poured. Once ready, the class is then presented to each judge. When judging is complete the stewards remove all glasses, and move on to collecting the next class of wines for judging before the process is repeated.

Being a steward at an RNA show was a great experience, certainly a rewarding one with so much gained after being given the opportunity to rub shoulders with so many experienced and knowledgeable people in the industry.

Results for the RNA Queensland Wine Show 2012
No comments:

This is plush and oh-so heavenly. A superb Barossa Shiraz. Never heard of Arila Gardens? I suggest you introduce yourself...

CONSIDER A DONATION FOR THESE FREE REVIEWS

Since 2011, over 5700 reviews have been free to access. Consider a donation to keep Qwine Reviews thriving.