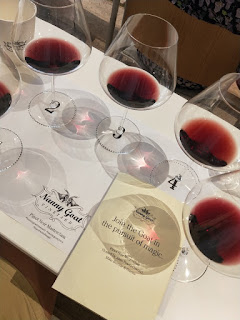 Earlier this week I was invited to attend the Nanny Goat Benchmark Tasting hosted by winemaker Alan Peters-Oswald, Mike Bennie and the distribution team at Mezzanine.

Three flights of Pinot Noir were explored benchmarking Nanny Goat's Central Otago Pinot Noir against other reputable labels from around the globe.

Due to another commitment I had to leave early and I was only present for the first of three flights.

A summary of events up until that point...

Mike Bennie introduced the wines after acknowledging the Turrbal people, the original custodians of the land on which the tasting was held, Brisbane's Calile Hotel. What struck a chord here was the link Mike made between how the indigenous people lived sustainably and how that translates to the wine industry. Going further, he spoke of Turanga Wai Wai - the New Zealand equivalent to 'terroir'. Meaning 'The place where we stand', the wines presented are a reflection of the place where they come from.

Central Otago is broken up into six unique sub-regions and dates back to the 1970s. The first commercially produced wine was released in 1987. I was fortunate to have travelled around the region only a few weeks ago and the distinction between sites is incredible.

A comment I have heard often in recent weeks is that Central Otago Pinot is 'Pinot for Shiraz drinkers' due to their density and generosity. But from all the blanket statements, Mike says that through Gibbston you can see lean and skeletal wines, Bannockburn show power and grace while warmer wines come from Pisa.

Nanny Goat are powering along and they continue to produce quality wines. Winemaker Alan Peters-Oswald said the name of the brand is a reflection of the goat's drive to succeed in tough conditions. Given the terrain, the vines have to struggle. The first vintage was released in 2005 and Alan came on board in 2010.

Nanny Goat is currently going through the process for organic certification.

You had me at burgers and pizza night. Wrap your lips around this cracker. A blend of Mataro, Grenache and Shiraz, it's three of Tim S... 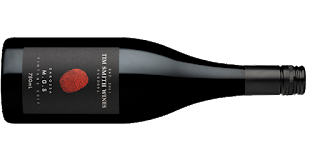